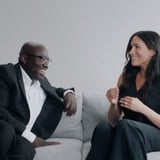 This week, British Vogue editor in chief Edward Enninful revealed that Meghan Markle's guest edit of the magazine's September 2019 issue was the fastest selling issue in the magazine's history. To celebrate the good news, Meghan posted a behind-the-scenes video on the Sussex Royal Instagram account - which was recorded back in August - showing her and Edward discussing how the issue, and their collaboration, came together.

The video opens with the pair sharing how the guest edit came to life. "In January, I got a text from my phone" Edward recalls, to which Meghan responds: "I wanted to see if you would help me with Smart Works, right? And so, there we were, having tea." Edward remembers barely containing his excitement on a visit to Buckingham Palace to meet her, where she insisted he call her Meghan and not "duchess." During the visit, Meghan recalls asking whether she might be able to guest edit a Vogue issue as part of a larger project. "Maybe I could push it a little bit more and see if you would be willing to let me guest edit," she said. Edward replied, "Yes please," thus and so she became the first guest editor of British Vogue in history.

The video then cuts to the two phoning some of the 15 women that were featured on the cover, including Laverne Cox, Adwoa Aboah, Yara Shahidi, and Jane Fonda - who had particularly nice things to say about her inclusion in the project.

To finish off the celebration, Meghan ran out of shot telling Edward she had a "little surprise." She returned with two glittery party hats and party horns, which made them both burst into laughter as Meghan said "Congratulations, E!" Watch the full video above to get the scoop on more behind the scenes about Meghan's successful guest edit.